mood turns sour after sharpie tries to give business advice 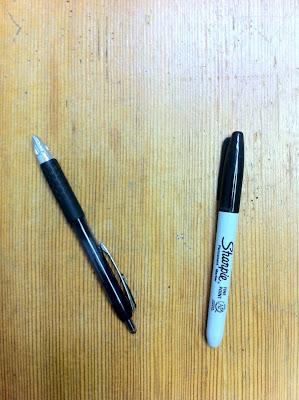 A Sharpie marker attempted to give business advice to a Uniball Signo Micro 207 pen today, only to be met with deaf ears.

The unknown pen approached the Sharpie today, complaining that no one knew what it was while virtually everyone was familiar with a Sharpie. The Sharpie suggested that the pen shorten its name, as "Uniball Signo Micro 207" was difficult to remember. The Sharpie went on to suggest that the pen should stand for something besides being just another pen, much like Sharpie took ownership of the permanent black marker market long ago.

Unfortunately, the pen quickly turned itself off from the Sharpie's advice and looked away. "It's just the latest in a string of bad news stories for Uniball Signo Micro 207 shareholders," a research analyst noted. "It's looking like 2011 will be all about Sharpie again."
Posted by claysummers at 3:54 PM