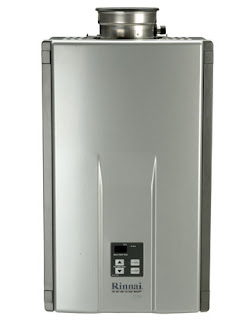 When Steve Patters purchased his Rinnai tankless water heater in the summer of 2004, he was just like any other new Rinnai customer - giddy from the thought of never running out of hot water again and anxious to install the new appliance. Little did Patters know that he was about to embark on what might just be the world's longest shower.

Patters owned a lawn care business in Charleston, SC. His days were spent working in the sun, and like most people who are outside all day, Patters enjoyed nothing more than a long hot shower when he got home. Problem was, his water heater was about as reliable as a two-dollar watch. The temperature was erratic, and the hot water almost always ran out. Patters had adapted to taking short, ungratifying showers that slowly tore him apart. Instead of a nice long shower to relax after a hard day of cutting lawns, Patters turned to junk food like honey buns and zebra cakes for relaxation. He started gaining weight, and his hygiene suffered as a result of taking such short showers. His job performance began to suffer as well. Lawn care no-nos like dodging ant beds and throwing cigarette butts on lawns then running over them became standard for Patters. As his co-mowers put it, "He just didn't seem to care anymore."

Finally, Patters girlfriend Pam intervened. "He just wasn't the same Steve. He wouldn't talk about what was bothering him, but I knew it had to be those bad showers." Pam convinced Patters to use the money he'd been saving to see a two-night run of AC/DC and buy a Rinnai tankless water heater instead. "It was a huge step for Steve. He even had 'Dirty Deeds' as his ring tone. But he knew he had to change things." So the two of them set off to their local Rinnai distributor. After a careful pondering of which model to buy, Patters decided on a model v53e. Little did he know he was on his way to setting a new world record.

Patters quickly installed his new Rinnai unit, and immediately tested it out. He jumped in the shower, and after he had hot water longer than four minutes he was instantly hooked. He thought, "I could stay in here all night!” but got out so he could tell Pam about the glorious experience he just had. Pam recalled later, "I could already see a change in Steve. It was a complete one-eighty." The next day at work was particularly grueling for Patters. Cutting seven lawns in eighty-eight degree heat, he couldn’t stop thinking about the shower that awaited him when he got home. After work, sure enough he went straight to his bathroom to start his pre-shower ritual. He turned on the faucet, and tested the water temperature with his hand. Perfect. He plugged in a small boom box and put AC/DC's greatest hits on repeat. And into the shower he went. For sixteen straight hours.

After forty-five minutes, Pam poked her head in the bathroom to check on Patters. "Are you OK Steve? You've been in there quite a while." Patters replied, "Oh I'm just getting started baby!" as he belted out the chorus to AC/DC's "TNT" as if he were front row at the show. Another half hour passed. Then another. And another. Pam continued to check on Patters, but each time he reassured her he was having the time of his life and not to worry. After three hours in the shower, Patters requested that Pam change the CD to Metallica's "Ride the Lightning." Pam did so, but insisted to Patters that this was not normal and that she was worried about him. Patters responded to her by inviting her in the shower for "a little rock n' roll time." Not amused, Pam went and got Patters a stool to put in the shower with him, as she worried about him standing that long. "Thanks babe!" Patters responded. "You're the heat!"

As the six-hour mark approached, Patters declared to Pam that he was going to pull an all-nighter and not to worry about him. He tried to explain to her that this was all he'd ever wanted, and to just let him enjoy it. He explained the hot water to be ever-flowing and marvelous, that it was almost too good to be true. He told her he wasn't ready to get out, and that he didn't even know when he would be ready. But he assured her that eventually he would eventually get out. Pam was at a loss, and didn't know what to do but go along with the odd situation. Hours passed, with Patters only requesting that Pam change the CD every now in then to a different rock masterpiece. Worried about his nourishment, Pam gave Patters a nutty buddy to which he replied, "Thanks Pambo! Love you mean it!"

Steve Patters stepped into that shower at 7:12pm July 8, 2004 and didn't get out until 11:15am the next day. When he finally got out, he toweled off, walked over to Pam and said, "That may have been the greatest moment of my life. Thank you for convincing me to get a Rinnai tankless water heater. I owe you big, baby snugs." While Patters was in that seemingly endless shower, Pam documented the time he spent in there and sure enough, there is no other shower on record to have lasted that long. Steve Patters now holds the world record for world's longest known shower, made possible by the breakthrough technology of endless hot water by Rinnai tankless water heaters. And though that shower was extremely long, Patters' power bill remained low as Rinnais use less energy than any standard water heater. Though Patters' story is not typical, nor does Rinnai promote attempting world records, they can guarantee you a steady stream of hot water. For as long as you want.

Posted by claysummers at 9:56 PM