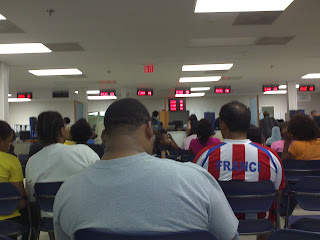 Life's best moments are not at the DMV.
I just got back from there, it was predictably terrible. It's almost too known and cliche of a thing to write about.
The Atlanta DMV is a trailer-esque structure right by Turner Field. "Fifteen dollars!" a man screamed at me as I parked. "I'm just going to the DMV, not the Braves game!" I shrieked at him (there was a Braves game going on).
It took an hour and a half. And it was hot, bad hot. A crackhead started preaching at everyone waiting, but his sermon was nonsense. Something about "You know you did it! You know you did it! Now tell Jesus!" I shrunk in my chair disgruntled.
I became even more disgruntled when this lady sat right next to me (sit somewhere else wtf!). She sounded out of breath and was chugging a Mountain Dew. And I swear. She kept periodically burping and turning to me and saying "Excuse me!" This happened at least four times. Six at most. One time she put her hand on my shoulder and said "Excuse me, I got the burps!" followed by hearty laughter I think she was hoping I would take part in. Yeah right. Dream on. Not now. Not ever.
I took the above picture at the DMV with my Motorola Razr phone.
Posted by claysummers at 2:47 PM